“Transcendence and beauty is possible during both the renaissance and golden-age of a culture, as it is during the decline of empire.” — Anonymous

END_OF_DOCUMENT_TOKEN_TO_BE_REPLACED 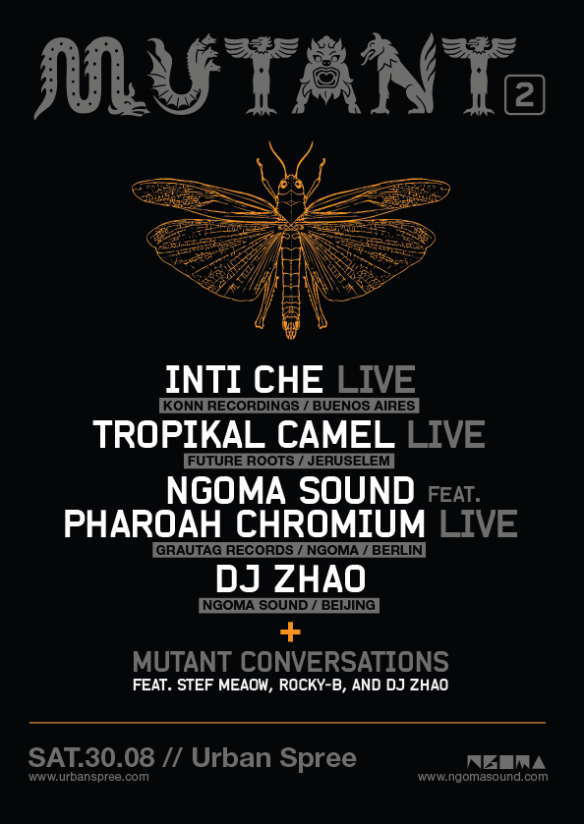 Industrial nightmares and Shamanic visions collide in the club. Ancestral voices bleed through grids of the city. Diasporic sounds and mutant rhythms transformed by migrant movement, shaped by history. Fragmented Psychotropic Bass pulsating through the deepest valleys and highest crests of your mind, in the kaleidoscopic center of the omni-verse.  RSVP on fb

END_OF_DOCUMENT_TOKEN_TO_BE_REPLACED

Bigup Bomb Diggy crew out in Amsterdam for inviting me to contribute to their mix series.

END_OF_DOCUMENT_TOKEN_TO_BE_REPLACED

Rhythms born of the tropics grow up in colder urban climates:  A re-newed attention to percussion is appearing on the many different shores of Northern Hemisphere electronic dance music; as a new generation of artists in the US and Europe channel, re-interpret, and recontextualize Afro-diasporic drumming traditions according to their own local sensibilities, reaching to complete the mother continents’ circle of musical influence.

In Detroit and Chicago intricate percussive patterns are growing right between the rigid 4-on-the-floor, snare-on-the-2 beat. Evolving directly from street level forms such as Ghetto-Tech and Booty-House, new drum sounds integrate with the cold and hard latices of industrialized assembly line structure – among others, the exceptional track by The Grizzl and J. Phlip is a perfect example.  interlocking microscopic beat segments by Afrikanized robot drummers are revitalizing increasingly impoverished styles like Hip Hop and Techno, machines under duress reaching new states of intensity.   Juke may be a freak mutation, a strange autistic grand child of Afrikan music with a mechanical brain and artificial limbs, and is itself giving birth to new hybrid styles both at home in the US and abroad (many of the tracks here fall in this one-step-removed category of Juke-inspired music).  Addison Groove brings streamlined house tempo footwork; while Chicago artists like Wheez-ie and Brenmar from the Movelt Posse come with their Juke inflected club music sometimes more informed by Afrikan urban music than anything from America – one listen to 28 – Bak it In or 16 – So High will convince you.

In Europe, the UK-Funky movement is in full swing, with its obviously Afro-Caribbean derived beat propelling the dance forward, represented here by mainstays  Roska and Doc Daneeka.  in Germany artists like Mode Selector, Dark Sky, and Schlachthofbronx are formulating their own Afro-Teutonic sonic worlds, sometimes reflecting the cold and sun-deprived climate of their homeland.   There are also micro strands of European producers making direct interpretations of Afrikan styles such as Angolan Kuduro, exemplified here by Diamond Bass and Portuguese artist Roulet.  Besides proponents working within genre delineations, there are many exploring unclassifiable areas between them.  For example UKG legends Bias and Gurley’s “Roll” remixed by Blackdown is a frankenstein monster borne of Garage and Juke, Sampology with the epic and all encompassing “Transatlantic Skanking Dub”, and Gremino and Baobinga & I.D.’s hard edged mutant Afro-Bass.

Northern Tropikal is either the lastest chapter of the continuing story of the original Afrikan pulse spreading, pollinating, multiplying, or “western” urban nomads accessing deep memories of Motherland rhythm heritage within the harsh reality of concrete jungles.  Which ever perspective you choose, one thing is clear:  Afrikanized Killer Beats are on the swarm.

the first 8 volumes in this Reboot.fm radio series.  for tracklisting please go to the soundcloud pages for each show.  to download of course simply click the downward aarow on the right side of the player for each show.

before you listen and download: how much are these products worth to you?  if possible, please make a donation.

The super awesome and diverse Akwaaba asked me to do a mix to represent the first 2 years of their existence, and it was a challenge. The releases cover a wide range of both classic and modern sounds — how was i going to move from Malian roots to African Salsa to Kwaito, Hiplife, Afro-pop, Jazz, Funk, House and Kuduro? This is what i came up with. enjoy!

Not sure what Kuduro means in the Kimbundu language of northern Angola, but its colorful translation in Portuguese is in some ways fitting of the music in both form and theme. Still, even though a lot of the music is hard, and a lot of the songs about fucking, the phrase is very much limited in describing the rich layers of word and sound, and becomes reductionist if taken only at face value. Kuduro can also be playful, humorous, soulful, emotional, ominous, scary, joyful, celebratory, and uplifting. It is also sonically adventurous in radical ways, fearless in its pushing and often destruction of dance music’s aesthetic boundaries, in ways often more bold and creative than sound-design obsessed electronic music from North America or Europe: from sweet accordions to reckless synths, from 8-bit game console palettes to near industrial noise, from samples distorted way beyond recognition to some of the deepest basslines in the world. And the vocals are just as wildly diverse: from “normal” singing to what sounds like children rapping to animalistic growling, grunting, yelling.

The many different flavors of Kuduro come from both its roots as well as later influence: mainly evolving from Batida rhythms (itself a fusion of African, Brazilian, and Caribbean traditions) of the 1980s, Kuduro has since branched out to sometimes incorporate elements from many other styles including Cape Verdean Funaná, Coupé-Décalé from France and the Ivory Coast, Afro-Brazilian percussion, Western Hiphop and Techno. A concise example of this melting of tradition, current club culture, and sonic experimentation might be track 28: Batida – Tribalismo Com Sacerdote, in which what sounds like distorted Mbiras (thumb piano) coexist with Angolan rap, furious rave energy and absolutely mental synth lines which verge on noise.

And speaking of Western Hiphop and Techno, this mix adopts quite a few Detroit Ghetto-Tech and Chicago Juke samples, to draw parallels between inner-city Afro-diaspora underground and African urban sound. Because, at least from where i’m standing, the Parallels are many: relentless and insistent focus on rhythm; use of repetition past the point of monotony in becoming pure abstraction; fast tempo and intensity pushing the dancefloor near breaking-point; gritty, raw, and unpolished sound; and finally, ruthless libidinal energy which defies any attempts at restraint.

Also, besides a few entirely unexpected and thrilling use of cultural pastiche in the songs themselves, there are 2 of my mashups here: track 16 which incorporates Indonesian Jaipong drums and track 35 which transforms the orchestral version of an old rave number we all know. Mostly consisting of both older and newer Kuduro from Angola, this mix also includes a few songs from Tanzania, Cote d’Ivoire, Cape Verde, and Brazil. I tried to avoid Western interpretations of Kuduro altogether, but 3 tunes feature non-African collaborating producers or remixers: their inclusion is testament of the strength of these tracks.

(as featured on Gen Bass and The Fader)

Framing house music, perhaps the most depoliticized of all urban musics, whose narrative revolve around unreflective pleasure seeking, in a political context may seem incredulous to some. Yet this incredulity would be based on a superficial reading of the essence of house music culture, despite what it has become in the commercial sphere: in its very inception, the escapism into a fantasy hedonistic world was an expression of the underprivileged and marginalized, and the creation of a sanctuary of acceptance was nothing less than a political act of the oppressed and discriminated against.

Perhaps even more than Chicago or Detriot 67, the political dimension is deeply interwoven into the urban musical fabric of South Africa, and has profoundly influenced its evolution. Zulu protest songs live on through Kwaito, the first musical expression of a free South Africa, and from there the current House culture developed: if less overtly rebellious, it nonetheless retains in its beats and voices the spirit of revolt: the urgent and passionate expression of a people who have been subjugated for too long.

The Zulu word Ukulwa means war and struggle. and in this context it can only mean a war against oppression and the struggle for freedom and independence. Apartheid may have officially ended, but its myriad effects can be unmistakably felt in a slew of social problems which plague the nation today, from crime to domestic violence as result of the break up of families, from poverty to various hardships which come from an entire generation having been systematically deprived of formal education. Thus even while many positive things are taking place, as South Africa is surely rising as a proud modern nation, even as we rejoice in these blissful rhythms, we must remember this war, and both continue, and continue to be inspired by, this struggle against domination, against injustice: Ukulwa.

The drum comes from Africa, and also techno. Here is an extremely simplified version of the lineage: slave songs – blues – gospel – jazz – funk – disco – house – techno —- the circle is complete. After all, the 4 on the floor hypnotic groove can be found in the myriad styles of African music from every era. House and techno grew up in the northern hemisphere, acquiring a character a bit removed from the rich rhythmic traditions of the mother continent. But in recent decades electronic dance music has been developing in Africa, and a new wave of club music is blossoming and flourishing.

History was made in 2008 with Warp Records’ release of DJ Mujava’s Township Funk in Europe, and the world is slowly coming to grips with the awesome power of African electronic music. Motherland house and techno is spreading far and wide, forming the rhythmic basis for urban bass music in the UK and elsewhere: Africanized Killer Beats on the swarm!

Dj Zhao on the web

it's not easy for a dj outside of the mainstream - If you have enjoyed my work, please donate via PayPal to: ngomasounds@gmail.com

a trio of DJ, Percussion, and Reed instruments, NGOMA Soundsystem fuses past and future, east and west, ancestral rhythms and hyper-modern sound. Ngoma Soundsystem connects the hottest dance music styles new and old from the Motherland and beyond with improvised rhythmic and melodic invention. Dynamic interplay of live instrumentation with dj and computer makes NGOMA Soundsystem a versatile and powerful musical entity operating against all fictional cultural borders and illusions of separation.

DJ Zhao brings the best contemporary and classic dance music together from all five continents, with focus on Africa. With in depth selections spanning wildly different times and places, DJ Zhao’s remix and mashup work directly connects "East" and "West", acoustic and electronic, traditional and hyper-modern. Amateur ethno-musicologist and professional booty shaker, Zhao is an International Ambas...sador of BASS not only talking about, but demonstrating through raw sound experience, the underlying unity of all earth cultures.

Born and Raised in Beijing, China, and active as DJ and sound curator in the US since 2000, Zhao has organized critically acclaimed long running events focusing on Improvisation and Sound Art as well as Techno. After relocating to Berlin, Germany, and starting the Ngoma collective, Zhao has been performing regularly at clubs and festivals including: