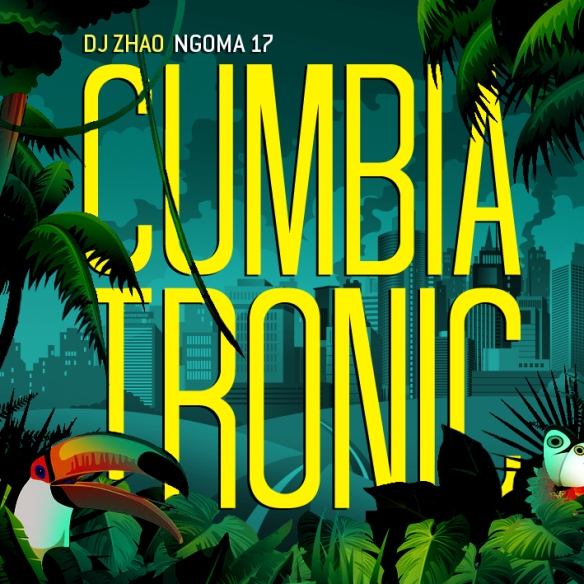 Very excited to bring you this long time coming Neuvo/Electro/Bass Cumbia mix, about time i showed solidarity with all my South American sisters and brothers, Christmas day is as good as any other 🙂

For a long while i played mostly classic Colombian Cumbia from the Discos Fuentes “Golden Age”, but recently more and more quality urban electronic and digital Cumbia which combines bass and tradition, with lots of groove and soul, has been added to the crates. The tracks here encompass many different worlds simultaneously: Afro-Latin heritage, international electronics, Hiphop, Dancehall, Reggaeton, sometimes even East Asian or Middle Eastern sounding melodies. While many diverse elements are involved, I have stayed away from related styles such as reggaeton, Moombahton, Latin Hiphop, Latin House, Tribal Guarachero – the selections here are nearly all immediately recognizable as Cumbia, with the characteristic chugging rhythm and copious amounts of distinct accordion. Most of the big names in the game are represented here, as well as several relatively unknowns, and a few unreleased exclusives and special edits from me. It was also difficult to not include any of the hundreds of Classic or “Trad-Modern” all time favorites. There will be time for all that and above mentioned… hopefully 🙂

This wave of “Digital Cumbia” is of course only the latest in a series of revivals, reinventions, and re-constructions of the music. Its roots are several hundred years old, in the coastal areas of Colombia, from a cultural (and biological) fusion of Africans with indigenous populations (“gaitero” music made with the large Amerindian flute is a good example – check track 07 and 08), with influences from Europeans (accordion), as but 1 of dozens of Afro-Latin styles.   From its rural origins to modernization for urban audiences in the 1920s; its absorption of swing, jazz and other foreign sounds; building up to the “Golden Age” of the 60s and 70s; to relative negligence by the world at large for some decades as the ghetto music of the underclass; to where we are now, the context of this mix: Cumbia’s current place at the center of hipster party scenes world wide – it’s a long, fascinating, and complex story, told by quite a few different historians and musicologists, here are a few links, i encourage everyone to dig further into it:

Cumbia: The Construction of a Musical Genre in the Mid-twentieth Century

Latin America has of course a long history of struggle for justice, freedom, equality, and human rights, against repressive economic policies and disastrous political measures, mainly coming from and at the hands of the United States.  Just like in Africa, many democratically elected Latin American leaders were systematically removed and replaced by corrupt lapdogs in the making of foreign controlled states which brought immense suffering for local populations but made money for Corporations such as United Fruit (origin and meaning of the phrase Banana Republic).  Generations fought and survived, and today the fight continues against neoliberal global capitalism, which brings to the continent a new wave of intensified neo-colonial exploitation with disastrous social consequences and catastrophic environmental devastation.  In trying to acknowledge and spread awareness of these movements toward liberation in South America, and align good music with the people from whom it comes, the often under privileged and marginalized classes, this mix includes the sampled voices or words from Subcomandante Marcos, Che Guevara, Hugo Chavez,  Nicolas Maduro, an environmental activist, and Tanja Nijmeijer*.

Enjoy and have a great holidays!