Around the globe today, sparked by recent incidents of police murder and brutality in the US, with immigration and refugee issues intensifying along many borders, race and racism is again making headlines, a central topic of discussion across all sections of society, and new spaces have opened up for supplying ourselves with the knowledge and tools to treat this plague of the mind.  But before we can alleviate symptoms, undergo operations, toward healing and restoration, we must first examine its roots, study its nature, and identify precisely what it is not, and what it is.

WHAT IT IS NOT

There have been several recent studies which demonstrate instinctual distrust of faces which look different from our own. The more different the faces, the more distrust:

Antonio Damasio, neurologist and director of the Brain and Creativity Institute, pointed out the former usefulness of associating difference with threat. “Probably, the detection of differences is something that has an old biological history,” he said. “There possibly was a time when it was advantageous to recognize difference very rapidly, because difference might indicate a possibly unfriendly group.”  — Wayne Lewis, Journalist

This has sometimes been called “biological racism”, but there is a serious problem with this label: this instinctual distrust is related to, but needs to be conceived separately from racism as we know it.  Similarly, both xenophobia, the fear of difference, and ethnocentrism, the feeling that one’s own culture is superior, have existed since different groups of humans first came in contact with each other.  Yet while both of these concepts are also related to racism, they are not exactly racism either.

What we understand as race is the belief that the myriad of biological and cultural differences between ethnicities and groups can be summed up in sweeping generalizations, in large categories indicated by superficial physical traits.  What we know as racism is a particular way of classifying humanity on a hierarchical scale from “primitive” to “advanced”, “inferior” to “superior”, according to skin color.

Genetic differences between ethnic groups are biological facts; but there are much more genetic differences between different groups of Africans, than between Africans and Europeans.  What this means is that the way we have recently chosen to define the groups, “the methods with which we subdivide the differences we construe as “racial” characteristics, are subjective, historically and culturally contingent, and arbitrary. In biology there are many different ways to break down “race”, none really more empirical or correct than any other” (Phillip Leckman, Anthropologist).  Thus race as we understand it is like organizing the books in a library not according to subject, language, publishing date, or any other characteristics, but according to the color of the covers, and then declaring that books with blue covers use more refined language than books with red covers, green books are easier to read, purple books contain questionable information, and so on.

The above mentioned three pre-existing social dynamics, instinctual distrust of difference, ethnocentrism, and xenophobia, are commonly confused and conflated with racism; and this common confusion/conflation is one of the best ways to validate racism.  Saying “racism has always existed” is perhaps the best way to normalize and accept this modern disease of the mind, to justify its continued existence, to excuse the pandemic violence, cruelty, and injustice caused by it in today’s world.

Inequality and prejudice did of course exist prior to the modern era, but were primarily distributed along lines of class and culture, and not “race” the way we do.  Skin color was rarely much of a factor at all, but even when skin color was mentioned in ancient history as characteristic of foreigners, it was one sign of difference among many other signs, such as dress or language, and never was a determining basis for the judgement of another.

“Historically it is pretty well proved now that the ancient Greeks and Romans knew nothing about race.  They had another standard—civilised and barbarian—and you could have white skin and be a barbarian and be black and civilised.”  — CLR James

There were examples of practices such as banning of marriage to foreigners in some cultures, but these policies were caused by a great number of reasons, including the afore mentioned xenophobia or ethno-centricity, and not because the foreigners were viewed as belonging to an inferior or less-than-human “race” of people.

“The Ancients did not fall into the error of biological racism; dark skin was never a sign of inferiority; Greeks and Romans did not establish color as an obstacle to integration in society; and ancient society was one that ‘for all its faults and failures never made skin color the basis for judging a man’  — Roderick Douglas Bush, sociologist and author

“(Prior to 16th C.) African and Asian peoples constitued notions of distinction based not on skin color but on cultural exchange. (There was) ignorant ethnocentrism and xenophobia… (but) to feel (culturally) superior to someone is not necessarily to hate that person, and it certainly does not ordain that one can then capture, treat as fundamentally inhuman, and utilize that person principllay for labor.” —  Vijay Prashad, historian and author

Another common held false belief is that “slavery is as old as empires”. But this is not entirely true, because the various kinds of slavery practiced in ancient times were very different from the Trans-Atlantic Chattel slavery of the modern age in many ways, including ethnicity not being at all a factor. Again from Vijay Prashad:

“Despite evidence of enslavement in ancient times, it is clear, however, that the premodern mode of production was not based on slave labor (as was the Atlantic economy of the colonial era), nor was the sort of slavery practiced based upon the dehumanization of particular groups of people […]  The Chinese enslaved mostly other Chinese, Arabs other Arabs, etc.  Premodern slavery was sometimes brutal, (but besides war-captives) but just as common was a form of apprenticeship in which slaves learnt a trade and then later earned their freedom. […] The practice of slavery was often in the form of debt bondage; and slaves became free once again after the debt was paid.  In fact ‘Slavery was often used as a means of creating fictive ties of kinship” (like marriage).”

The aspect of racism in our times which distinguishes it from injustice of the past is the idea that there are distinct physical and behavioral traits arising from genetic difference between 3 or 4 major “races”, and that is grounds for systematic discrimination.  This doctrine enables dehumanization along artificially manufactured racial lines, in which entire ethnicities are viewed as “inferior” and “less than human” based on skin-color, and thus justified to use and treat like farm animals.  (the absurdity of “white”, “black”, “yellow” as distinct categories is highlighted by the following image: even people from the same geographic location are of an infinite number of shades)

“Slavery was not born of racism—rather, racism was the consequence of slavery.” — Eric Williams, historian

This pseudo-scientific system of categorization based on skin color was created less than 500 years ago, during the process of European colonization, with the specific purpose of dehumanizing entire populations which happened to have less effective weapons at the time.  The method with which racism typecasts difference is a phenomenon entirely unique to the modern era, beginning in late 17th Century North America.  The idea that people of European descent were of the “white race”, and that they were genetically superior to the “black race” of African descendants, who were not really human, was invented specifically to create disunity among the underclasses (who previously stood together against the elites), and facilitate their economic exploitation.  The poor white indentured servants whose existence was not very different from that of slaves now felt an affinity with their white masters because of supposed “racial alliance”, and class antagonism was diverted: since the beginning racism has been used not only as a rationale for oppression, but also as a theater of distraction from class inequality.

The next thing the politicians did sealed the deal: they paid poor whites a bounty for runaway slaves, and often made them overseers for slaves, turning every poor white in America into a prison guard against the people who had once been their neighbors and allies.”  – Quinn Norton, Journalist (from How White People Got Made)

European colonists of the 1600s explained the difference in technological development on the various continents not as the consequence of varied fundamental material conditions over time, but rather as expression of “racial difference”.  Early 20th Century capitalists explained poverty, unemployment, and crime as not the result of societal dysfunction, but rather as genetic deficiency within the individuals, which led to the annual sterilization of hundreds of thousands of poor women in NYC until the 1930s (the Nazis would later learn much from these practices of Eugenics).  Similarly, contemporary race theories and racist pseudo-science comprise of distortions of the theory of natural selection and the false attribution of cultural and economic differences to biological ones.  To the racial “scientists” of today black people are poor not because of systematic marginalization from a series of discriminatory and oppressive policies since abolition such as Black Codes, Redlining, convict leasing, voter suppression, racially charged predatory bank loans, and the school-to-prison-pipeline, but because “African descendants are inherently lazy and less intelligent” (see the 1994 best seller and hugely influential The Bell Curve, which argues that “human intelligence is […] a better predictor of […] financial income, job performance, birth out of wedlock, and involvement in crime than are an individual’s parental socioeconomic status, or education level.”  They also basically say that the elites should rule over all because they are more intelligent than the average population.)

Yes, there is just as much popular racist pseudo-science today as ever — another good example being this 2014 article by Nicholas Wade, the former science editor of the New York Times, published by Time Magazine. Wade’s basic ideas here are that human evolution continued during the past 30,000 years, after various large groups settled in different climates and conditions, and thus indeed took different evolutionary paths, both culturally and biologically.  In his premise Wade has set up enormous straw-men, such as the proponents of “race-doesn’t-exist” claiming that genetic differences do not exist, or that evolution of humans ever stopped.  In fact no legitimate social scientists today believe either of these clearly absurd notions, if any ever have.  The “take downs” of these straw-men which follow are extremely hollow, but surely sounds great to advocates of race (and racism).  As if this wasn’t enough, Mr. Wade is mired in all kinds of ahistorical falsity and racist distortion, such as the cause of conflict in the Middle East (they have not evolved out of tribalism!), and what made the wonderful wonders of the Industrial Revolution possible (Europeans evolved to a higher level of organization!)   It is chilling, to say the least, to realize that these ideas are apparently taken seriously today, even in some so-called “scientific” circles, and considering who presented them, and endorsed by which publication.  (another, more in depth take-down of Wade’s work here) 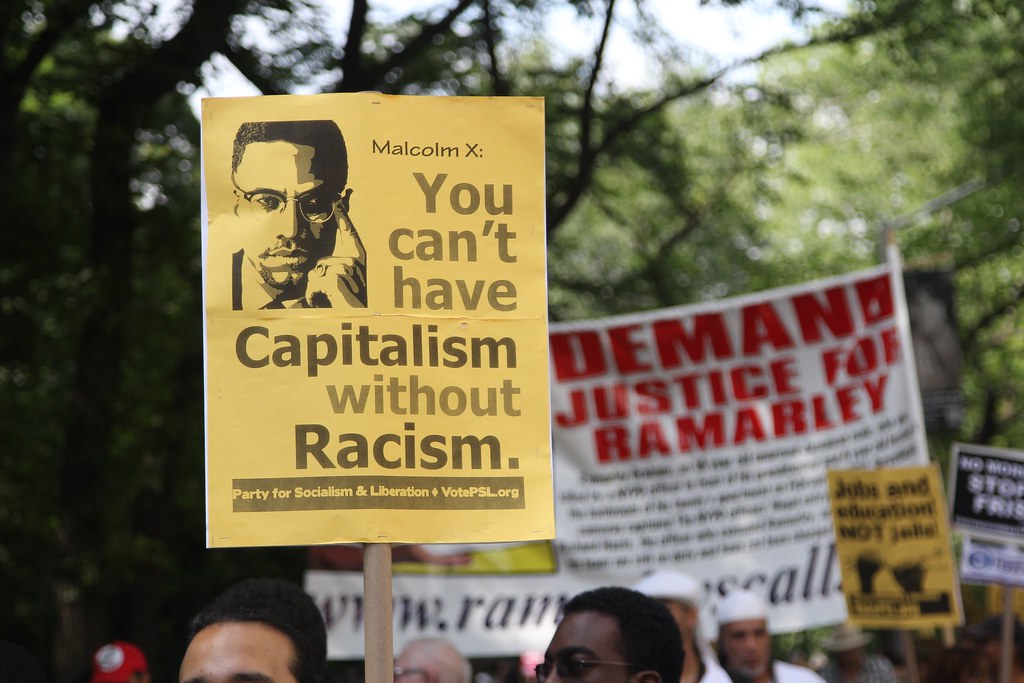 Certainly inequality and oppression is as old as civilization itself, but what we have seen in the last few hundred years is the dynamics and processes of injustice mechanized, streamlined, systematized, and more efficiently administered on an exponentially expanded scale, enabled by the invention of race and racism.  In fact a very solid case can be made for racism being the central ideological engine behind the building of the modern world, based on analysis of the central role of chattel slavery in the establishment of industrial capitalism.  The root disease of power, hierarchy, and subjugation has existed for 10,000 years, but racism is thus far the most powerful and deadly strain.