Berlin has been blessed this Fall/winter with many truly amazing out of this world vibes from the motherland and diaspora.  Here are some brief personal accounts:

Jagwa Music: flux power trance vibration from Dar es Salaam, Tanzania, playing a style of music with Chakacha roots known as Mchiriku, in Ritter Butzke, to a well attended but not packed house — Simply the most mathematically advanced and spiritually evolved music on earth in 2012.  4 percussionists produces robust, intricate, lattice work of dizzying interlocking rhythms: bass drum powerfully driving with the force of a monsoon, but no steady kicks, instead coming in unpredictable yet intuitive waves of intense clusters; smaller drums bang out unfathomably complex patterns not easily recognizable yet infinitely swinging — constantly changing yet always staying the same.  1 keys player emits sonorous sustained tones from a little keyboard, dexterous and serpentine, sounding somewhere between a church organ and Acid Mother’s Temple.  On top of it all is the singing/yelping of the vocalist, the very embodiment of defiant ecstatic energy.  Fierce and urgent: we have no time to waste, and must transcend tedious quotidian planes of existence NOW, simultaneously feeling the moments of this reality with more intensity.  I talked 2 random guys standing outside asking “what kind of music is it?” into coming in, and they were jumping and getting soaked in sweat with me in the very front for the entire show, and then bought CDs after.  The skill, beauty, energy and sheer spirit of this music is undeniable to anyone, with specialized tastes or not.  They do have slower songs too but the expression “Ape-Shit” would be an understatement in describing my behavior during some parts of the evening…  Now my other all time favorite live band in the history of the universe, besides Konono No. 1: Jagwa Music Rocks harder than Rock, is Funkier than Funk, and more danceable than dance music. 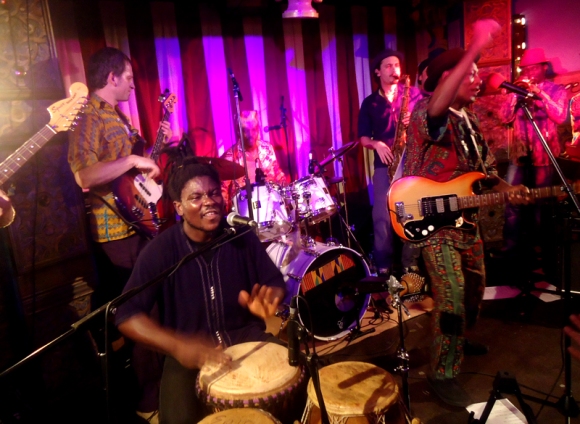 Legendary Highlife guitarist Ebo Taylor from Ghana and his band Afrobeat Acadamy played to a packed house in Kater Holzig.  Not as typically classic Ghanaian High Life as i would have preferred, but this timeless polyrhythmic West African funk was of course irresistible.  With the horn section not as in your face as with some other bands, and the guitars taking a more important role, the music is sweet as it is funky with a sensuous groove.  A band like this, playing 70s African styles sells out big stages in Paris and medium ones in Berlin: this means western audiences need 30 to 40 years to catch up to Africa.  So at this rate, by 2040 or 2050 Jagwa will be rocking the kind of huge crowds in Europe they should be doing right now – when band members are in their 70s.

Complex, masterful, and deeply funky music not pandering to simplistic Western tastes and not sanctioned by the hipster elite: Jaliba “King of Kora” Kuyateh and his awesome 8 piece Mbalax band from Senegal played for 50 local Gambian and Senegalise expats in a classroom of a Turkish community center, complete with unstable florescent lights: either super bright like in a super market, or plunging the room in total darkness.  Beautiful, stately, and sublime performance despite bad conditions and technical difficulties: in a just world this concert would have been in Staatsoper Unter den Linden (state opera house).Jaliba comes from the Mande tradition but has updated the sound to include a drum set, and bass guitars, making a fusion type of music which is to be sure primarily Senegalise, but sometimes with a touch of reggae and funk influence.  As each tune gets going, the culturally attired audience would, according to tradition, all get up off of their seats to make US dollar bills rain on the musicians, and sometimes sticking them into the man’s Kora as he is playing it (see photo above).

These behaviors which to the uneducated Western eye perhaps seem strange or even respectless and characteristic of low-class entertainment (strip clubs come to mind), are of course signs from a vastly complex and nuanced tradition which date all the way back to the Malian Empire of the 14th Century.  Curious about the Griots’ art and tradition, i am reading the book Griots at War: Conflict, Conciliation, and Caste in Mande, by i think the only Western person to ever become accepted as a Griot in Mali.  The entire volume of her fascinating experiences which tell of an ancient culture and its interwoven socio-political as well as artistic aspects is downloadable in E-book form here. 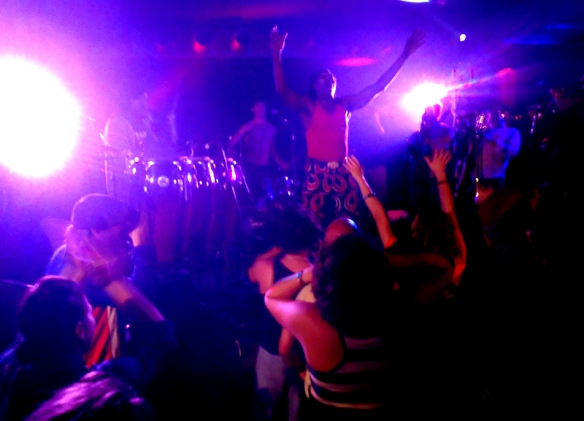 Sunday night at Bi Nuu, Antibalas Afrobeat Orchestra played a largely secret last show of a European tour.  Their take of Afrobeat is much more angular, rigid, and rawkus compared to Ebo Taylor’s band, and making often use of the 1-2 duple rhythm as one would expect from North America. Intensely political, with lyrics about the global prison state of mind and other forms of pandemic oppression, the music is fast and fiery.  The sound guy was mixing them as a rock band, with the Congas barely even audible until i actually requested to him that they be turned up louder…  This music seems to fill and struggle against the very boundaries, limitations and framework of the genre, so tight as to leave no breathing space, imbuing a sense of claustrophobia as well as anxiety and frustration, which is appropriate for the subject matter of the songs.